Trias Gallery in Oakville is pleased to be collaborating with 2 Toronto area gallery spaces to present exhibitions by our artists, Ernestine Tahedland Katya Trischuk. The gallery was located at the ‘ART at 80’ building at the corner of King and Spadina for 15 years before moving to Bronte Village in the fall of 2013. They continue to support artists by promoting their works to a broad audience by working closely with other galleries.

Based out of King City, ERNESTINE TAHEDL was elected to the Royal Canadian Academy of Arts in 1977 and the Ontario Society of Artists in 1984. Her awards include:  1993 the Governor General’s Canada 125th Anniversary Medal, 2002 Queen’s Golden Jubilee Medal, 2000 Arts and Letters Award from the Arts and Letters Club of Toronto and 2013 the Queen’s Diamond Jubilee Medal. A retrospective of her work covering the last 60 years was organized by the Varley Art Gallery of Markham in 2006 and toured to several Galleries across Ontario. This retrospective evolved to a major exhibition that travelled through Europe in 2012 and 2013. The Bravo Network filmed a television series featuring Ernestine as one of the prominent Canadian artists in, “An Artist’s Life” filmed and aired in 2007. Her works are shown nationally and internationally and represented in public and private collections in Canada and abroad. Her next exhibition of her recent work will open at the Kultureben Schloss Pöggstall, Lower Austria in July 2014.

“All art constantly aspires towards the condition of music.”Walter Pater (1839-1894)

This series of paintings allows me to immerse myself into “pure” painting without being lost in it. Over the years I have searched for this freedom in my work. I explore and try to find the balance between the realistic image and the pictorial values for my paintings. I hope that spirituality and serenity are integral to my work. Colour and light are additional factors that guide my work. Colour to me is light. For me, the series comes close to a musical experience and was painted and inspired while listening to classical music which is reflected in the titles of the works.

I feel these paintings are a more direct, human and spiritual expression without confinement of the motif or formal restriction; yet still consist of all those elements that I have explored in my work over the years.

Toronto painter and emerging talent, Katya Trischuk will have a selection of oil on canvas works on display June 28 – July 31 at the INTEX DZGN Gallery near Sheppard Ave. E. and Bayview.

“Little of All”   by Katya Trischuk

Born in the Ukraine, Katya Trischuk discovered her artistic ability at an early age and was often in trouble at school for drawing in her books or spending her lunch money on art supplies. In spite of this, she often won prizes for the best drawings in school and went on to study at The Art School for Children and later tutored with the famous Ukrainian painter/realist Leonid Ivanovich Maximov. In the mid 1990’s, Katya turned to painting with oil on canvas and for 3 years had her own art atelier in Kiev. In April of 2000 Katya was invited to exhibit her work at The Museum of Ukrainian Literature in Kiev, where her work was acclaimed by art critics and received positive reviews in the national press. Today Katya continues her passion for painting. She considers herself a “process-oriented” artist and uses a palette knife for layering, dry-brush techniques, cloths and even her hands to create paintings that are rich in vibrant colours and lush with texture. This gives her work a distinctive quality. Katya’s work has been showcased several years at the prestigious Toronto International Art Fair/ Art Toronto. 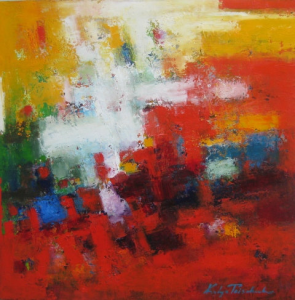 The work of Katya Trischuk, spans several different genres. Her strength lies with still life and figurative works. The preferred media is thickly applied oils with a strong emphasis on composition and vibrant, lyrical colour. With the still life works, they are often indulgent and flamboyant with evidence of energetically applied colour. Similarly her portraits of women are often exaggerated, with elongated limbs and softened faces. The ladies are often theatrical, seeming to want to reach out of the space, letting the viewer know that this is a performance, not just a painting.